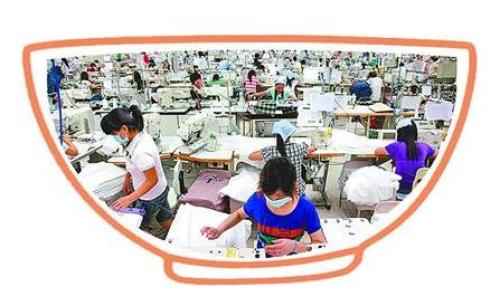 Under the combined effect of various factors, many processing trade orders are being transferred to Southeast Asian countries such as Vietnam. However, experts believe that this trend is an inevitable phenomenon under the background of China's trade structural adjustment and is not a bad thing for China.

According to reports by Vietnamese media in recent days, the long-term trade deficit between Vietnam and China has caused concern in Vietnam and Vietnam is taking steps to change this situation. In addition, the European Unionâ€™s newly introduced GSP policy stipulates that from January 1, 2014, various categories of Vietnamese goods including shoes and hats will enjoy preferential tariff preferences. At the same time, China, India and other countries were canceled the offer.

In response, the industry insiders interviewed by the International Business Daily believe that with the rise in the cost of raw materials and labor in China, it is not uncommon for more and more production and manufacturing industries to transfer to Southeast Asian countries such as Vietnam and Laos. The introduction of this new regulation will promote the transfer of more Chinese processing trade enterprises. However, this is an inevitable trend in the adjustment of China's trade structure. It is not necessarily a bad thing for China, and it will not change the status of Vietnam-China trade deficit in the short term.

The transfer of processing trade is normal According to the Ministry of Industry and Trade of Vietnam, from 2014 to 2016, GSP will bring more opportunities for Vietnamese companies. According to GSP, in 2014, Vietnam's export tariff on footwear to the EU will be reduced from 8 to 17% to 4.5%. This means that Vietnamese textiles, aquatic products, plastics and footwear and other products will further expand the advantages of exports to the EU. â€œWith the continuous increase in the cost of human and raw materials in China, coupled with the need for domestic trade transformation and upgrading, the proportion of processing trade has decreased and the flow to low-cost countries is normal. This preferential tariff policy has been tilted to Vietnam and other countries and does not exclude some. Enterprises facing the EU market have migrated to Vietnam for the sake of maximizing profits,â€ Jin Bosong, deputy director of the China Trade Research Department of the Ministry of Commerce Research Institute, told the International Business Daily.

However, Jin Bosong also said that this is not a bad thing for our country. Processing trade is a low-end industry, and the withdrawal of such enterprises will help optimize the domestic economic and industrial structure and encourage domestic enterprises to extend to the high-end of the industrial chain, so as to obtain higher added value.

Cai Jiaxiang, vice president of the China Foreign Trade and Economic Cooperation Association, also told the International Business Daily that the processing trade is to respond to the lack of commodities in the domestic market. Now that the domestic manufacturing industry is growing, it has been able to meet domestic demand and consider it from the perspective of cost. It is also not worthwhile for foreign-funded enterprises to engage in processing trade in China. Transfer is an inevitable trend.

The person in charge of a processing trade company in Zhejiang told reporters that in recent years his industryâ€™s export profits have fallen faster and faster, and gross profit has dropped from 10% 20 years ago to less than 3% now.

China-Vietnam trade deficit will not change yet According to the latest statistics from the General Bureau of Statistics of Vietnam, in 2013, Vietnam-China trade totaled about 50 billion U.S. dollars, a year-on-year increase of 21%. Among them, Vietnam exported approximately 13.1 billion U.S. dollars to China, an increase of 2.1%. According to the EU's new regulations, raw materials imported from ASEAN account for more than 50% of Vietnamese products exported to the EU before they can enjoy preferential tariff preferences. However, most of Vietnam's textile and chemical industry raw materials are imported from China. In recent years, people in the Vietnamese industry have repeatedly stressed that it is necessary to take measures to change the current situation of the trade deficit between Vietnam and China.

According to industry sources, from the structural point of view, Vietnam exports raw materials with low economic value to China and imports high-valued finished products from China. This phenomenon shows that Vietnam's processing and manufacturing industry is relatively backward, and it is difficult to change in the short term.

In this regard, Jin Bosong also agrees. He said that the transfer of processing trade from China to Vietnam will, to a certain extent, increase the level of its manufacturing industry, but given that Vietnamâ€™s current economic level is still relatively low and development needs a process, it is impossible to reverse the trade deficit with China in the short term. â€œThe biggest problem now in Vietnam is the lack of manufacturing talent, and there is a strong demand for wage increases in China, and there are constant changes in the labor environment,â€ said Jin Bosong.

Jin Bosong believes that if Vietnam wants to improve its own manufacturing level, it is imperative to establish related courses in universities and cultivate professional talents, while allowing these talents to play a key role in the company.